Space radiation. Source: nasa.gov
Effects of radiation on FPGAs. Types of errors
All silicon chips are susceptible to the effects of radiation, both ionizing and non-ionizing. Electron-hole pairs are created in MOS structures, so the leakage current increases and the threshold voltage of the transistor varies. They can be classified into two large groups: cumulative effects and singular effects. 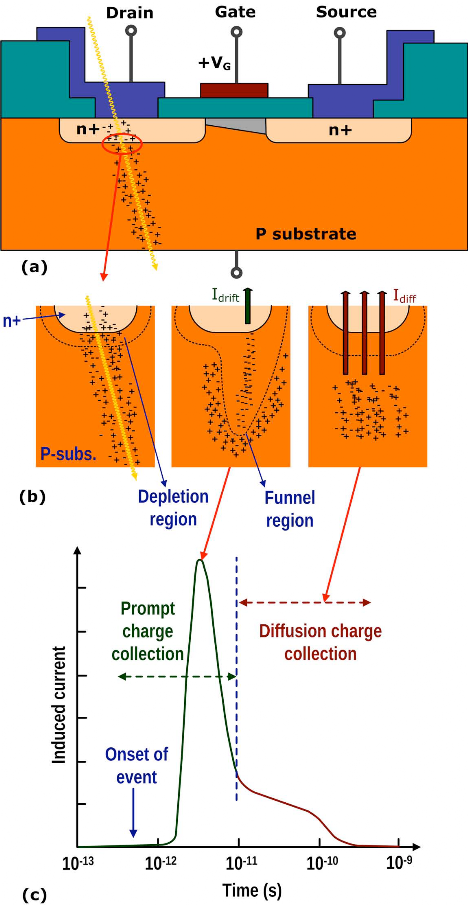 Generation and transport of charges by the effect of a SEE in the drain region of a NMOS transistor. Source: [3].
Different FPGA technologies. Relationship with regard SEEs and reconfigurability
The selection process of FPGAs for space applications takes into account two major factors: immunity to SEE and the versatility of the system (possibility of reconfiguration).

Depending on the technology used by the FPGA to carry out its configuration function, three types of FPGAs are distinguished:
FPGA types in function of configuration data storage technology
FPGAs based on Antifuse technology have been and are widely used in space applications due to their high immunity against SEEs. However, given their non-reconfigurability, more and more space applications use FPGAs based on other technologies. Space applications that use FPGAs based on Flash technology are more recent solutions to those based on antifuse technology, but with good results due to the relationship between their resistance to SEEs and their ability to reconfigure. These are usually systems whose manufacture implements an extra shield against radiation. FPGAs based on Antifuse and Flash require additional processes in addition to the CMOS process to create the rest of the chip, while FPGAs based on SRAM technology are manufactured using the same CMOS process as the rest of the chip, they have a reconfiguration capacity almost unlimited and higher performance, since they are usually a generation or two ahead of Flash and Anti-Fuse technologies, as well as a lower cost than those based on Flash and Anti-Fuse technologies. In return, these SRAM-based solutions must implement an external configuration system with a Flash or EEPROM type memory to store the files used in the FPGA reprogramming and have a higher power consumption.

Selecting the best FPGA device for a specific task or set of tasks can be difficult because there are many families, each offering different resources, performances, tolerances, interfaces, and development tools.
Mitigation techniques for errors caused by the effects of radiation
The effects caused by radiation on SRAM-based FPGAs, due to their susceptibility to SEEs, meant that -for a time- such technology was considered unsuitable for aerospace and space applications. Currently, manufacturing processes (substrates layers, 20nm to 7nm FPGAs,...) and mitigation techniques are employed, with the result that SRAM technology FPGAs are found in systems such as the Mars Curiosity Rover.
The following error mitigation techniques, or a set of them, are implemented in FPGA developments for space applications:
Hardware mitigation techniques for SEE:

Mitigation software techniques for SEE:
However, FPGA-based implementations and developments are not an easy task, and you may not always have the experience, resources, or time to fulfill your planning.
Our team of engineers specialized in FPGAs and SoC / MPSoC offers you experience and services to develop your product, with the mission of helping you reduce your development cycles. At GENERA Technologies we have a long history helping our clients to convert the signal acquired by the sensor into processed, reliabilted and real-time information in the shortest latency in a wide range of applications and sectors. Contac us.
References
[1] Radiation Impacts on Satellites due to GCRs and SEPs.
Mike Xapsos GSFC, Code 561, NASA.
https://ccmc.gsfc.nasa.gov/RoR_WWW/SWREDI/training-for-engineers/Xapsos_Space_Weather_Training_GSFC.pdf